In the windows display manager, it shows the VS228 as monitor 1, and the VS229 as monitor 2 and sadly, windows does not offer an option to change this. When booting, the bios screen is shown on the VS229 display, thus the card also considers the VS229 as display 1 before windows is loaded.

When calibrating the VS229, I noticed that after the process was complete, and the profile installed, the colors were changing on the VS228, and no visible difference was taking place on the VS229. 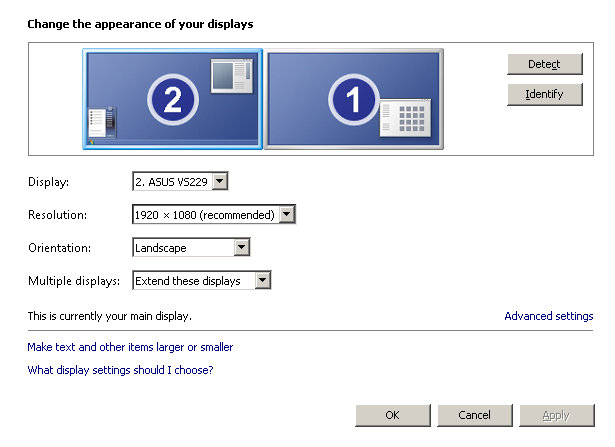 The logs are a little old, as when I initially ran into this issue, I ended up removing displaycal, and re-installing the colormunky software and making due with its calibration, though it does not do as good of a job as this application.

All in all, the issue was simply the profile for the VS229, kept applying on the VS228 monitor when I attempted to calibrate it using mostly default settings with the exception of using the native white point, and increasing the number of patches.

I believe it was also an older version of the software, though I am not sure of the version, but in the zip file, I also included the color profile, and measurement report, and logs that was generated at that time.

I can pull other data from that time if needed, as I have an image of the drive before doing a fresh install.

The OS both times was Windows 7 Ultimate x64

From comparing the files, the main difference that I see is that is lists the display as VS229 #2 instead of VS229 #1  (as it was before the fresh install)

This website uses cookies to improve your experience while you navigate through the website. Out of these, the cookies that are categorized as necessary are stored on your browser as they are essential for the working of basic functionalities of the website. We also use third-party cookies that help us analyze and understand how you use this website. These cookies will be stored in your browser only with your consent. You also have the option to opt-out of these cookies. But opting out of some of these cookies may affect your browsing experience.
Necessary Always Enabled
Necessary cookies are absolutely essential for the website to function properly. This category only includes cookies that ensures basic functionalities and security features of the website. These cookies do not store any personal information.
Non-necessary
Any cookies that may not be particularly necessary for the website to function and is used specifically to collect user personal data via analytics, ads, other embedded contents are termed as non-necessary cookies. It is mandatory to procure user consent prior to running these cookies on your website.
SAVE & ACCEPT